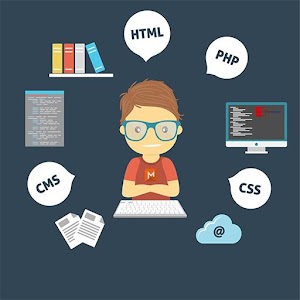 4 Stars for effort, 5 Stars for concept, 0 Stars For Actual Gameplay And application. The button is way too small, and you cannot rapidly click as it will not give you any units, making the whole point of the idle/clicker game not really work. After 5 minutes i cannot continue trying to click tthis button. Love the concept and the effort you put into this makes a difference in the end.

How to use Coding Idle (Ci) for PC and MAC

Now you can use Coding Idle (Ci) on your PC or MAC.


Love the idea, complaints addressed quickly My connection problem hasn't repeated, thanks for the quick response. Love the idea. I almost quit playing but after idling and unlocking new features I have begun to like it more and more. Maybe a bigger button so it is easier to click or a click area that grows with upgrades to allow multi finger clicking? Thanks for the hard work, keep it up!

I like the concept overall, but the game is quite buggy. After 30 minutes of playing tapping on the get more button causes the game to lag, so it only registers 1 tap per second and the other taps just queue up. Another one is that tapping causes the timer to lag, noticed this after 5 minutes ingame. Tooltips won't show up when tapping on the upgrade name. (I may be bad at taping them, idk..) Hope to see fixes soon.

Pretty decent Loved the idea, but it should be taken way farther. Beat the game after less than a week of mainly offline progress. Thought a full game would end up forming, which would have been epic. Noticed the lag like all the others, but the last bug update fixed it. Now only the animations for how much is being added every click lags.

Really awesome concept. Seeing the function build out with every upgrade is great. The game does slow down a fair amount in the mid-game, even on a Google Pixel. The 'Ad Blocker' upgrade is cute, but I'd rather pay $1 or $2 to not see ads at all.

I love the concept. But. There is this massive drop in frames once an upgrade appears. I dont know what is happening but it is ruining my taps per second. Perhaps inplement a frame-skip to avoid slowdown in the app. Other then the constant FPS drops when trying to reach upgrades. The game is solid!

Great, small game, still with a few minor bugs It's a great game, and at only 11.5 MB for the app, it's the only quality game I could still fit on my phone, BUT there is noticeable lag right before the upgrades change, and you can't spam tap the "get more" button. Another bug is I just lost all my progress after making this rating, and I had saved plenty of times. 1star lost for now... :(

I really like this games idea and execution that's why i gave everything a 5. However the game chokes up when i play it. I'll tap fast for 30 seconds then wait another minute for it to catch up to my number of taps. If you could fix that this would be a 5 star

Basic cookie clicker game which has a neat approach. Unfortunately it appears to be quite poorly implemented. Lots of lag in the UI thread, tooltips don't work when you have bought the uograde, etc. Needs a rewrite, layout is oftentimes confusing.

I have one problem. When I am tapping fast, its laging. It happens in bigger value of Units, like 10 000. Its pretty annoying. But I like the concept of the game but it needs more fixes.

I really like the game but after closing out of the game and reopening after the first time the lag when pressing any button on my Samsung Galaxy S7 can be unreal. especially since I need to press get more to progress faster, it gets a bit tedious waiting for all of my button presses to go through. this is honestly my only complaint though

This is a really good idea of a game and I like it. I would have given it 5 stars if I could only save the game. I got save lv2 and offline progression, but when I exited the game and left it for a while, the progress resets when I open back the game. Hope you can fix this problem.

It's great. But this game lags. After I purchased something(idk what I think it was for the timer) the frames would just drop when I tap even just once. Right now I'm finishing up the 100k stuff but it's hard when I have to wait 15 mins before I can buy anything. I tap to fast for this game ig. Other than that great game.

Updates seem to have stopped randomly. Have not bought one for a billion so this appears to be a bug. I have hundreds of millions with no upgrades to spend them on. If this doesn't get resolved I may end up uninstalling which is a shame because I do like the game.

I love it, just one problem I have many upgrades(level 2 and 3) and the game gets stuck right after I start it, and because of that now I can't play it at all. I play it on a S3. Please fix the problem, and I'll give 5 stars. P. S. The game is very fun, the rest of the game is perfect

I really like this, it's different and refreshing. But at a certain point I stop getting options for upgrades, I'm in the hundreds of millions of units, and it's been a few days, so I'm not sure if this is an error or if I need to keep waiting?

Great idea I loved it until I got the first animation upgrade. Then all the buttons had a major lag (at least 2-3 seconds) and the game freezes for several seconds. Please fix this issue so I don't have to delete the game!!! :)

Game is nice, but it starts lagging alot after few minutes. There is huge delay between click and registering click. And if you smap it fast, it just lagges more and crashes.

Love the idea, but it gets really really laggy at some point. So laggy that I cannot even press the Get More button once without lagging the whole game.

Painfully laggy for a text based game. Engaging, but after a few of the ui upgrades, the interface gets extremely slow, and that just shouldn't happen on a nexus 6

It tells me I need an internet connection every time I start it. Even though I know I have one.

Its a fantastic idea/ concept i like it very much theres just the thing with lagging even when all other apps are closed and so on. Would be 5 stars if thats fixed keep up!

Great game, keeps me entertained. But, the tooltips upgrade is very finicky abs often I can't activate tooltips to see what they say

I love this game in all honesty one of the best games I've played, keep up the good work, exccept when you get to like past 50 million the production takes so long to get the next upgrades in fact I'm still at 70 million and haven't seen any more upgrades

3 ads before game play even began, the html page doesn't prevent user selection causing anything perceived as a selection by your device to interrupt gameplay. several cosmetic upgrades whose effects are not visible.

Frame rate issues main problem i have is lag due to multiple touches when u mash the main button the. Progess bar and the ms timer lags and drops frames

I love this game, but it doesn't seem to work properly anymore. It hasn't let me buy upgrades in a while, since at least the 9th. I bought an upgrade for 2.5 million and now I have 235 million and still no upgrades to buy. Please fix this soon.

Cool idea... Game is clunky though (using Axon7 so it's not my device) and not a fan of so much ads

Cool concept, but it gets boring really fast. I'm in a place now where nothing happens for a couple of days. Also, it lags like crazy.

Good game, mixes the upgrade/idle game concepts. But since I've hit about $20 million, I haven't had any upgrade options.

After you get the upgrade with numbers that pop-up, game lags worse over time until it's unplayable

The game is pretty good so far but the only problem I'm having is that whenever I tap an upgrade to see the information about it, via the tool tip upgrade, it mostly doesn't work. Other than that is game is pretty solid for me.

Great game bud. Love the concept. If you could add how the other stuff is coded in would be awesome. Like the colors an the button that is tapped would be great. Keep up tye good work brotha

Its great but This game is fun but after some time it gets very laggy please fix it!

Utterly boring game. After the first term minutes it's just endless clicking for the next hour, and them waiting days and days and days for the game to beat itself. It doesn't write itself, just a small piece of pseudo code representing the timer and point gains.

Fun time waster Enjoy it, but wish the button was in a better position and bigger. My fingers keep pulling down my menu. Would like to see multi tap. 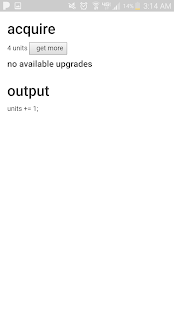 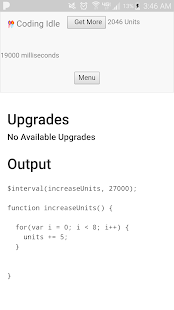 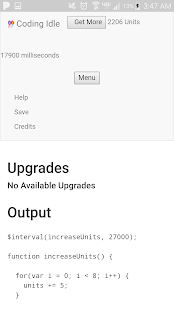 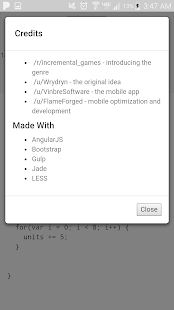 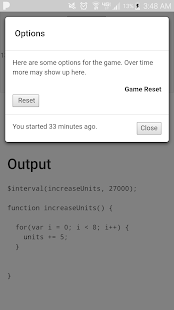