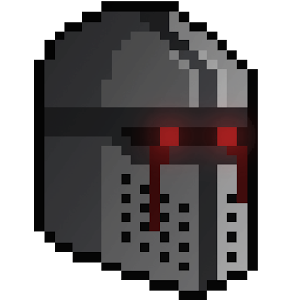 Soooo sick Button lags sorta alot on my s5 once you get somewhat far in the game and at first I hated the enemies get stronger feature, but now I love it. Best game I've played on android in a while. More upgrades would be cool, it's almost too easy to get them all early on. That being said, keep up the good work!!!

Now you can use Curse of the demon’s sword on your PC or MAC.


Not good idea Realisation of game cool, one of the best roguelikes on android, imho. Not much skills, no bag and items, no plot, and lvl concept not good, you not progressing, static, you need to not die first 30 minutes, its not interesting, moreover after that game loosing all charm. I had hope this one like magic rampage. No ads or video watching btw

Castlevayna and Dark Soul's child This game is amazing! It's like you take the platforming of Castlevayna and mix it with the infuriating difficulty of Dark Souls in that you lose your souls upon death. Although, after about 20 minutes and the first boss, the buttons start to lag, and the button placement isn't little-screen friendly. If you get this, you might need a tablet.

Fake difficultly isn't fun The skeletons can stun lock you to death. The mages do 15 damage out of your 25 health in one fireball and they can cast it while you are hitting them so its impossible to not take damage when you fight them. The platforming is cheap as hell. You lose all souls on death and after only a couple of deaths foes are all killing you in 2 hits while having huge health so it quickly gets impossible to even get the first upgrade. Pass on this piece of trash

As a Dark Souls fan I find this game to be unfair. You die far too quickly compared to how much damage the enemies take to kill. Because every time you die it increases the difficulty it makes the game more difficult the worse you are at it. It's not a bad rogue like by any means and I still recommend you play it but I did not like it.

One of the best games for mobile It doesn't require internet and is very addictive. Only one problem later on is the fact that souls are useless once every upgrade has been bought. You could try making an opposite statue that you spend souls for life? Just giving my opinions, loving the game so far :)

Poor Execution I wanted to like this game, but it's not as good as I hoped. Namely, the maps often form in ways where I cannot win. Like, let's say the door is on a surface below me, right? So, what is the logical solution? Jump down, of course. Except the camera is panned up just enough to not show me the hole I'm about to jump into. And believe me when I say this happens a LOT.

Good idea But ene. get harder each death and cant keep souls for upgrade meaning limited lives b4 too strong too kill making continue a worthless feature. Wtf. Cheap tactic.

What was the idea? After some initial game deaths enemies are too strong to kill and upgrading beyond the tutorial double jump seems to be out of reach. Once all the patterns are mastered however, the upgrades start happening. After the double soul one the game strats being easier. Once you get a taste for the game, you realise it is already over. No new skills, or levels, you keep revolving around the same few levels.

Need some upgrade The gameplay, art and music are awesome. But there are just 3 enemies, the rooms repeat and I haven't found any demonic king yet, do I need to play more?

Great game : I demand a sequel This is actually my first review, so you can tell how much I liked your game. The only problem is that the bosses were a bit too easy, and that souls are useless after you buy all the abilities.

Great Game! One complaint The levels vary very little. Add more dungeon room types and designs. Other than that everything is solid!

Fun Game , Needs more upgrades Fun game but needs more progression such as new swords /perks and would be nice to have ether a dodge or shild button. Other then that its fun . Similar to soul games . Kill and earn souls to exchange for upgrading. I fully upgraded within say n hour . So that needs way more .

Wow just beated the game recently! It felt really achieving when u finally beat each and every bosses...guys pls make a sequel to this game I would literally love to pay money just to play a game that has the same or even more punishing difficulty as this one

Difficulty ramp So when you die your enemies get stronger............ so yea you die two too there times and you get one shoted you die all your souls get lost and if you dont die the game is way to easy. The intro is unskipeble so you have to waist 30 seconds to get back to the original dificulty. The wizard one shots. When you leave you loose souls whutch makes upgreading even harder.

Cardboard cutout movement to characters but very old school castlevania/darksouls look and feel. It's very challenging but the on screen controls need work.. Maybe an 8 way d-pad? Character sometimes won't turn around in time enough to escape! You have to HOLD the directional button...very annoying

Good 5* game Addicting like dark souls. Found and killed the demon king. But it was a very short game. Needs more modes, more story, more bosses, and definitley more than 3 types of enemies.

Some suggestions I have a shield, but not shield button!? 10 minutes in and I have nothing to spend souls on. Please make abilities cost more (abilities to double soul gain or cut price of skills render souls useless faster) or perhaps have the player buy better defense, life, and crit rate and crit damage using souls (not as a one time soul purchase, but as a continual increase). Also, perhaps adjustable icon size and placement for movement and attack/jump buttons. Otherwise, fun mechanics and I look forward to updates!

Fun but. . . Fun game bad dynamics. When you die enemies get stronger. I die because it's to hard and then it makes it harder. Still fun to play

Awesome Needs a sequel. If you are going to update the current one, My suggestion would the ability to increase the potential of current powerups, like Enemies give double souls - Enemies give triple souls, etc..

Artificial Difficulty The enemies getting stronger when you die is kinda garbage because then your fated to die in one hit for the rest of your life also they expect you to be a pro in the beginning with phone controls?no thanks the gameplay is pretty good I guess but the artificial difficulty needs to go

Dark Souls-ish GREAT GAME! You die and come back and slowly get better and better like Dark Souls 1. Love this app

This can be great, if you actually try to make it work devs. Difficulty isnt hard, bosses are fiddly/snorefeats not enough things to spend souls on, this can be a 5.

Hard and diffucult I love how enemies get stronger everytime you die and levels get different too recommend you download the game.But get ready for blood,rage and glory because your about to enter a realm of demons!

One of the best Mobile games out there! If anyone has played any Dark Souls game before, they can feel the same type of challenging experience. The punishment of death was a brilliant way of learning to git gud, making you care for your HP. Problems with the game was, the fact that your EXP become pointless after you have all the perks, which hence the reason why I gave this game a 4/5. Just a suggestion as someone who really likes this game, add items that can be bought using leftover EXP, from a level that could have some type of merchant.

Dark knight Please make a part 2 to this game, i like how this came out and it's very addicting i couldn't put my phone down

I liked this game very much. It's like dark souls. I hope you will make another part of this game which will have a little story and some new elements like different weapons and powers.

WTFF Its like the same levels after u win a few of them...needs work BADLY

A must try for any Dark Souls fan, lacking a block button and customizability, but otherwise it's a really good game.

Lame Same 5 dungeons ove and over, same 3 enemies over and over.

One man team, Did better than a team of 200 This would be a cool Dark Souls game if Bandai Namco notices your talent.

Amazing game. However, it is extremely short and you can easily see everything within a half hour of downloading it. Still would recommend to play it.

Good game I got it because it reminded me of dark souls and it was fun to play, but needs more upgrades

Can you beat it? I have everything I just wanna know if you can beat it really

i lve it please add new levels, perks, bosses, and some kind of house to live in


Live the story of the possessed knight in search of revenge against the demon king.Experience a high difficulty platformer with ever changing dungeons where your enemies get stronger with your defeat.Could you beat them? 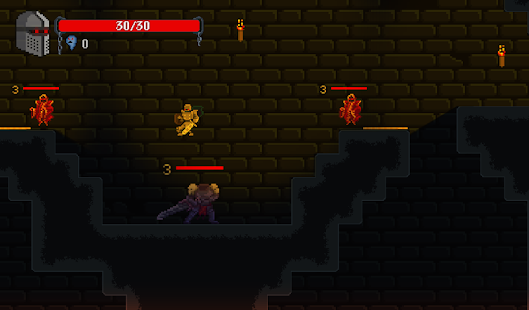 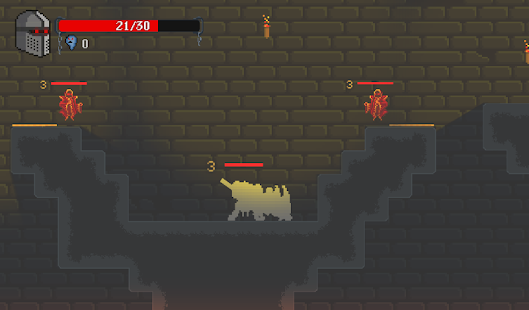 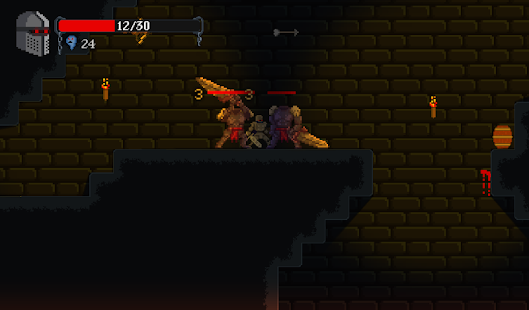 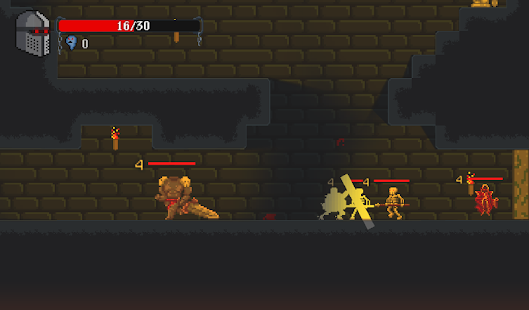 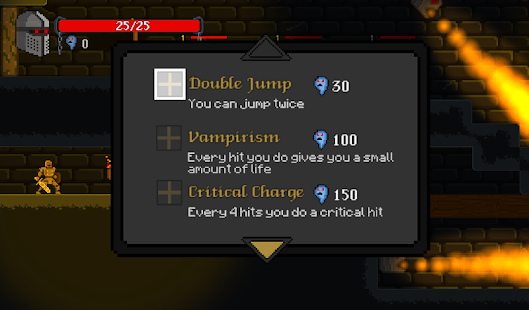 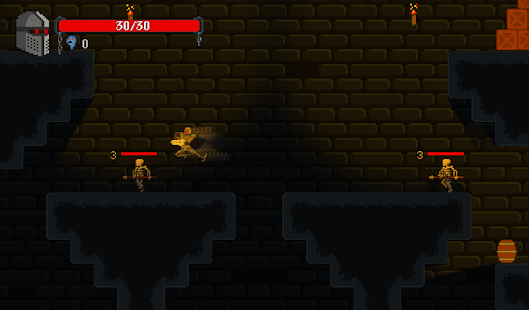 We don't provide APK download for Curse of the demon’s sword but, you can download from Google Play