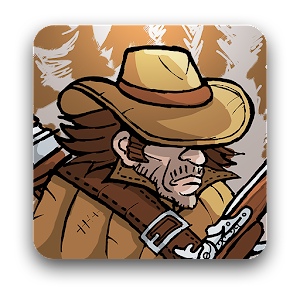 Monotonous Played the game about 20 times, gets boring playing same level over and over. Never made it past second cave and then you have to start all over. It's an interesting concept, but without a save option long term playing is minimal

How to use Gravebound Free Roguelike RPG for PC and MAC

Now you can use Gravebound Free Roguelike RPG on your PC or MAC.


Fun but troubling The game is fun, even though I died often. The trouble is, even though I saved the game, whenever I died, the savegame is gone. Is that working as intended or is that a bug? Free version 1.3.3

3 1/2 stars... Just started but... wow is it hard to stay alive. Everything damages me at least once before I kill it, and you've only got one piece of food to get back part of your HP once. Bandages maybe, or a sleeping bag to recover between fights?

Not bad Really diggin the new Western look to the game, but it still desperately needs sound. No music is fine but sound effects of some sort are badly needed. Keep up the good work and never stop improving this game!

Unplayable Let me know when I can buy things in the shop and use restorative items, yeah? Until then, uninstall.

Love it A great roguelike with infinite replayability. Have been playing it for 3 days. It has cons though: no music, no way to exit game, barely no sanity refill items and annoying ally at the end which just makes the end boss harder.

Nice Although I'm not sure I like the movement system, this is the second rougelike I've played that hasn't scared me off. I like the idea of the old timey tonics boosting stats, damaging health, or reducing stats; it felt unique. Heh, I had thought the tonics were randomized each time, much to my surprise (soon death in some cases). I recommend it for beginners to rougelikes (like myself).

Cool game, but... skills take way too long to recharge. Way too long. And the random tonic thing... Half of them f you up! Whats the point? There should be some rhyme or reason to that, like keywords that give a clue as to the nature of the contents. C'mon, if a bottle of mystery juice smells funky, for example, chances are its bad... idk. Also, enemies are very predictable. But, i like that youve really steered clear of majic. Bonus, cuz its hard to make an rpg thesedays without it. Love the theme, love the genre. If you make moving sprites, awesomer, and the ability to cancel a move by redirecting the character. Hey, i like your styleman good job, hope this constructive critique helps improve your game! Peace!

Needs music Glad to see this updated finally, even if just a graphics overhaul. If you can't be bothered to add new areas and elements, you could at least add a quick rebirth system for people that beat it multiple times. Same monsters and gear, but each rebirth has better gear and harder monsters. Would be nice if discovered potions and stats persisted for a stronger feeling of accomplishment.

Really fun, but crash after second boss. This game is preally fun, but it crashes after i beat the insect boss. The first time, the game flat out crashed. The second time, it would let me kill the little minions the insect boss summons, but woulf freeze when after i kill two minions. It's really fun otherwise.

im really liking this game so far. I love the classic feel and its a great pass time. however, I feel like it could be improved in several ways. I think you should be able to know what each "potion" does after you use it once, it gets really confusing. some music would be nice as well. but overall its amazing!!

Addictive Thanks for listening and giving slightly higher chance of health

Love it Haven't won a single game, but it's awesome.

Great game One of the best now. Great game good updates and a dev. who responds. Keep up the good work.

Great game! But it could use a bit more Only played the free version, but doesn't look like the pay version has additional levels either. Would be easy to have increasing difficulty, and new maps with each level (access by clearing the boss). -can also add new threats/monsters for each level. ALL IN ALL GOOD FUN, GREAT SPIN ON A CLASSIC!

Woot!! Shop finally re stocks!!!! Lost track of how many times I'm swimming in gold and nothing to spend it on

It's good, but it could be better. It's the only roguelike that I've found aside from Pixel Dungeon that actually seems like it was designed for a human being to play using a smart phone. It's also the only one that doesn't resort to the usual fantasy clichés - I especially like the snakeoil medecines as substitutes for magic potions. However it stops being fun in the cave, where you have to make use of a rescued partner to get through. Completely changes the feel of the game, and the guy (or girl) is too low in level for the game at this point and there aren't enough healing items to go around. I give it a B- out of 10.

Stupid easy. If you have any experience with rogue-like games, then you will find this one unchallenging. Entertaining for a little bit but quickly loses its replay value. Pros: open world exploration, sanity balance combat system, allies. Cons: not enough dungeons (only two) , easy combat, too few shop items (have literally accumulated so much gold at times that it's use is pointless. ) short storyline and lack of details.

Screw you I am NOT going to sit through a 30+ second video advertisement each time I want to play. UNINSTALLED

GUI suggestions Some stuff like health, status icons, and attack results, to name a few are too small. Plz put health and experience bars across top of screen followed by the smaller stat screens' ammo/keys/(food seems out of place.. bombs?) And move the skills from top to bottom with say least 6 slots and that's where food&potions should be used from aswell IMHO.

It's pretty interesting. Kinda reminds me of The Gunslinger by Stephen King. I don't see how nature and trees are flourishing in a post apocalyptic wasteland and the lack of music makes it kinda whatever but it's good. Battle animations, a health and magic bar atop the screen and more derailed sprites would greatly improve this game.

Great Good times. Feels like a western version of pixel dungeon with more detail and depth. Hints of fire emblem, hardly a tactics game though, much more roguelike. You will quickly learn that patience and caution will up your chances of survival, but the randomness of the game determines it much more. Lots of death, i.e., you dying, but not quite as frustrating as other permadeath games. There seems to be a bug - entering the cave and then exiting caused a crash.

Great game I want to know more of the story! This is a great game, I have put many hours into it at this stage and keep coming back to play more.

Good solid start of a roguelike I have played about 10 short games so far. Reminds me of pixel dungeon when it first started, but this was a game onto itself. I would just have to say options would be a big plus. Probably always showing your movement grid would be a plus. More healing would be a plus as well. Perhaps always having animals always drop food. It would be a major plus of going after them. I'm on the Galaxy Tab 3 and the screen doesn't fit properly. That's the only bug that I found so far.

Gneiss Great game. Does the paid version allow you to progress beyond the cave?

Ok but... Ok but doesn't fit on my screen

Nice game.. Like the style, the idea and the gameplay. Only fault is the reward system. Too little powerups, too little food, and it should be possible to sell bottles to find its purpose. Loosing points by testing every potion makes the game almost impossible. It should also be able to gain food after all enemies at a certain level have been defeated. That said, it is addictive, fun and challenging. Thanks.

Its all right I say that with more negative than positive

Awesome! Really fun game! I just barely beat it after don't who knows how many times. I can't wait for more content :)

So cool The game is so cool i have me


Gravebound: a turn-based tactical roguelike RPG! No two games play the same, providing countless hours of adventure and dungeon crawling.”Gravebound is a mash-up of several fantastic gaming genres…. Definitely don’t let Gravebound slip through your fingers. This is a game you’ll want to check out.”-SuperGameDroid.comNow with art by ShroomArts!Features- Randomly generated outdoor and indoor areas. […] 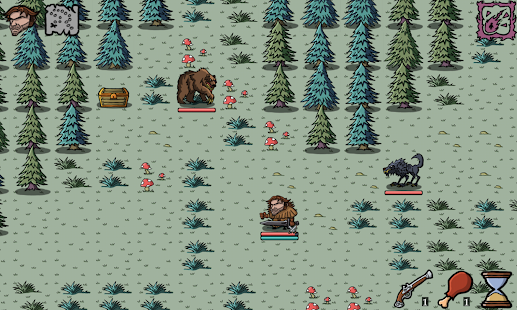 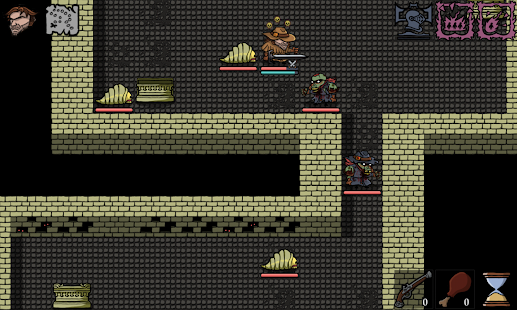 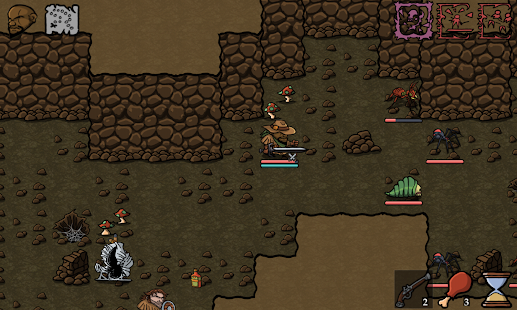 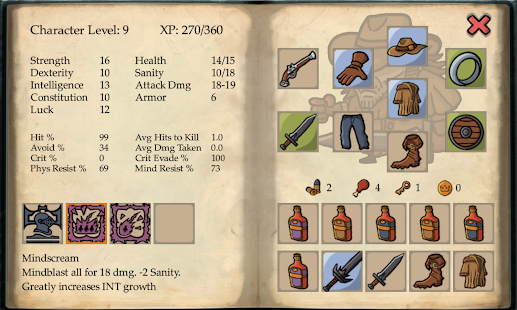 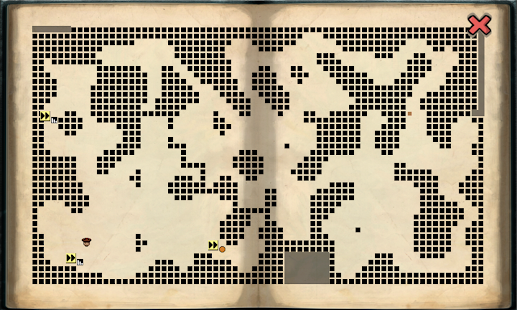 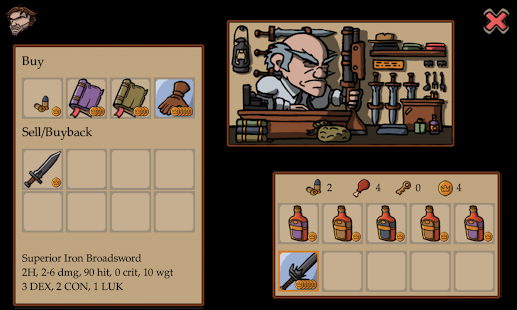 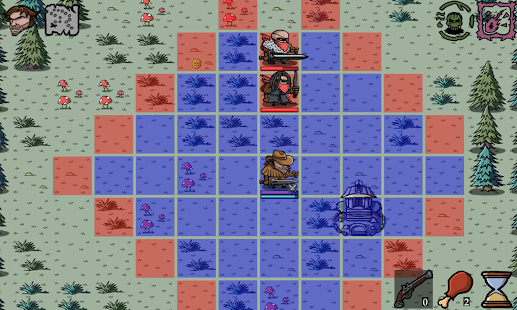 We don't provide APK download for Gravebound Free Roguelike RPG but, you can download from Google Play